Loading census data into SQL Server’s Geography Spatial Type should have been very straightforward.  Simply download the shapefiles from the census ftp site in batch mode, unzip, then import to a SDE feature class with the geometry storage type set as “GEOGRAPHY”.

Unfortunately, I was not that lucky.  During the import process with ArcCatalog, the 8+ million blocks failed after loading around 2.5 million records with a variation of the following error:

Translation: There was some feature in the data that had a valid shape according to esri, but not Microsoft.

There are some differences between how esri and Microsoft want the polygon shapes to be drawn, specifically with the order in which the vertices are drawn (clockwise vs counterclockwise) for the exterior (outer boundary) ring(s) and interior (donut hole) ring(s). The first attempt was to create a button in ArcMap which read the geometry from the SDEBINARY geodatabase, created the Well Known Text and then geography for each feature (accounting for the correct draw orientation), and then pushed the results into a SQL Server table using ADO.net.

I was fairly happy with my first results, until I remembered I wasn’t dealing with multipart geometry, empty geometry, multiple interior rings, and other geo quirks.  After some quick modifications, the code was done and the results were populated, however I still hadnt solved the problem of getting my data into GEOGRAPHY.  When I modified the code to pump GEOGRAPHY not GEOMETRY, I had the same failure.  Did a great job of solving the wrong problem – at least now I have a esri to SQL Geometry table loader.

I was definitely surprised to realize that you can in fact push unprojected data into the geometry data type, using the SRID from a geographic coordinate system.  I am not really sure why this is not an acceptable approach, other than geography is typically for Lat / Long coordinates, and geometry is for feet / meters units.  There are definitely stronger limitations on what can be pushed into each – geography being much more stringent.  One we realized this, I pushed all the polygons (WGS 84 projection) into a geometry dataset using ArcCatalog, then tried to convert the data to geography from there.

One recommendation we found was to use the geometry STUnion and MakeValid functions to try to fix the shape’s validity from a geography perspective, which can be seen here:

This is taking the source polygon, running the MakeValid() operation, then unioning the polygon with it’s first vertex, and finally converting the result to geography.  Doing so re-orders the vertices so that they are drawn in the correct order.

Using this query, I was able to start pumping Geography records, unfortunately we still found that the conversion failed.
At this point, I needed to isolate the record or records that were causing the process to fail, so I created this query:

FETCH NEXT FROM rowcursor
INTO @objectid
END

Here, I am taking all input records, iteration thru each, attempting to push the input row into a geography table, and where that doesn’t work, dumping the result into an error table.  This was very slow to run (1 day 21 hours), but it ended up showing me the feature that was causing the problem:

On a map, a pretty standard polygon with a pretty ugly and unneeded set of vertices shooting off in one direction. 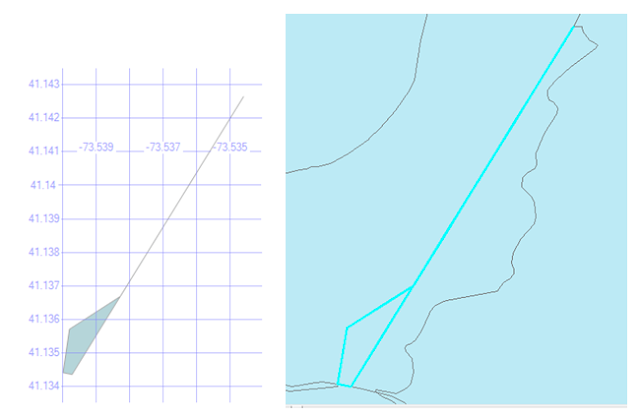 Unfortunately, there is not really a clean way of handling this shape, as far as I can determine, other than to manipulate the shape coordinates, and manually load this single feature into the table.

In the end, we have learned there are some issues with the census 2010 geometry, including gaps, overlaps, and funky topological discrepancies.  We also learned that it can be a major hassle with significant roadblocks to try to ditch esri formats when performing spatial operations inside the SQL database.  Finally, we re-learned during QA that esri handles cluster tolerance and spatial resolution, whereas SQL does not.  In this instance, esri was giving bad results along some polygon borders, whereas SQL was giving correct polygon association every time.

But, this effort is definitely worth it.  With proper spatial indexing and other logic, I was able to assign census blocks to 128 million input records in about 6 hours, which is way faster than any other esri options.  And we have some very handy reusable code for the future.

Recently my ArcGIS Server went down.  For some unknown reason the SOM process would not start.

The error message in the system logs was:The ArcGIS Server Object Manager service failed to start due to the following error: ArcGIS Server Object Manager is not a valid Win32 application.
I also had this error in the Application log:The application, C:\Program Files (x86)\ArcGIS\Server10.0\bin\ArcSOM.exe, generated an application error The error occurred on 03/12/2012 @ 13:58:12.647 The exception generated was c0000005 at address 0280C218 (ServerCore)

I started by doing many iterations of re-installing and configuring everything, which did not help.  I tried making some recommended registry changes which also did not help.  Eventually I came to believe that the problem was with the operating system, and started searching for similar cases where a windows service would not start.

It turned out that there was a file named "c:\program" that had been created by some unknown process the day before the application stopped running.   Because of the space in the folder name "Program Files", the system was getting confused and tried to run the "c:\program" file instead of my service file.  Deleting the file "c:\program" allowed my service to start.

Unfortunately I had basically nuked all my configuration settings with permissions / SSL etc, which had to be rebuild.  Of course that wasn't smooth and took several iterations of uninstall / install / configure to get right.  On the last iteration I removed the ArcGIS server configuration folder "c:\inetpub\wwwroot\arcgis", which allowed a clean recreate of all those settings.  Then I rebuilt everything using esri's documentation.

Next, my application was not working.  It uses dynamic token authentication via proxy as described here:

Each request to the server from the proxy page received a 401 Error-   I thought that it was a problem with the configuration of the token service, but eventually after trying out every possible IIS configuration, and confirming that the token was being received, I figured there was an issue with the code.  This was probably compounded by my authentication setting on the tokens virtual directory, which was set to integrated windows authentication (which was the only option that allowed the Rest directory and ArcCatalog to work from the local and remote machines).

I added the code below to my proxy page code from this blog post.

Which made the application work again.   Sounds easy, only took about 5 hours to figure out :)

Hopefully this can help someone out there!  The whole process starting with the server not working took about 24 working hours to resolve.   Soooo tired....
Posted by Roy Jackson at 9:21 AM No comments:

Writing tools in VB.net is very easy to do with the ArcGIS 10 Snap-In framework.  This is made even better by the fact that you can code with Visual Studio 2008 Express Edition, which is free, instead of paying for Visual Studio Professional as with ArcGIS 931.

The Select Distinct Tool that I will demonstrate is used to select unique values in your attributes.  Very useful for identifying duplicated attributes (such as IDS), or getting unique values based on attribute sorting (for example, give me the records having the longest segment length for each unique street name).  You can do this with SQL queries as well, but this tool is usually easier to do when your data is in file geodatabase or shapefile format.  If the data is in SQL server I would generally not recommend this tool.

Once you have installed VB express, and then the DotNet SDK for ArcGIS (and the service packs), creating a command button toolbar is very straightforward:
1
Create a new project: 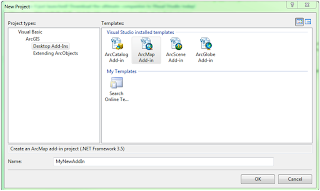 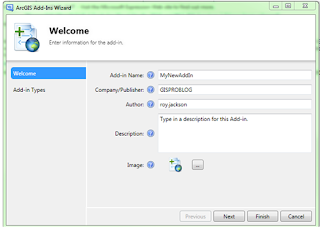 Choose Button as your Add-in type: 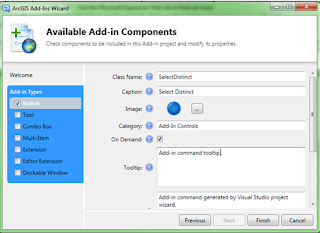 Add the ArcGIS ArcObjects SDK references you will need for your logic: 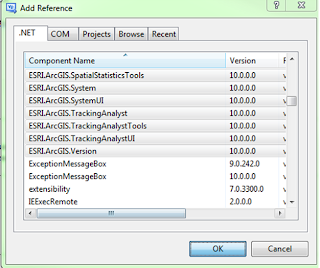 Modify the Config.esriaddinx file to contain a toolbar containing your button.

Auto Complete makes the toolbar configuration very simple!  You will have to add the bolded Toolbars section below manually, but the Commands section is created automatically using the wizard.

Configure the button class to launch the main form code.

Implement the frmSelectDistinct.vb code (see the download link at the end of the article)

Your toolbar will be available from the customize menu: Another great element of the snap-in framework is that it is very easy to distribute the actual file that makes the code available to the end user.   Simply provide the user the with the .addin file, and once they double-click it the code is installed!  No more windows installer requirements.  To remove the addin, you can look in ArcCatalog’s addin folder in the home geodatabase and delete from there by right clicking and choosing delete: I have seen some issues using ESRI SDK objects in your code when the end user doesn’t have the development environment installed, but these can be handled with various configuration settings.

Also, custom icons were a pain to figure out, but just change the "Build Action" property of the icon to "AddInContent", and "Copy to Output Directory" to "Copy Option:.

The source code, and .addin file for this project (look in the bin/debug folder), can be downloaded here:

The installer can be downloaded here:

I hope this was helpful!

Roy Jackson
I try to be the best I can be in all areas of life - professionally, with my family, and as a human being in general. I am always interested in new ideas, projects, recipes, people, and places to learn from and make a part of myself. Please reach out to me if you want to share! I enjoy talking about and solving business problems - if you have a complex problem, a time crunch, and a budget ;) let's work through how to fix the issues at hand. If I cannot solve the problem I most likely know where to get more specialized help.

The information in this weblog is provided "AS IS" with no warranties, and confers no rights. Please send questions, comments, sugggestions to gisproblog a{t] gmail.com.